"The prefix ‘meta’ has acquired something of a bad rep over the last few years. It has come to be understood primarily in terms of self-reflection – i.e. a text about a text, a picture about a picture, etc. But ‘meta’ originally intends something rather more colloquial. According to the Greek-English Lexicon the preposition and prefix ‘meta’(μετά) has several meanings and connotations. Most commonly it translates as ‘after’. But it can also be used to denote qualitative ‘changes’ or to designate positions such as ‘with’ and ‘between’. In Plato’s Symposium, for example, the term metaxy designates an ontological betweenness.

"Meta- does not refer to one particular system of thought or specific structure of feeling. It infers a plurality of them, and repositions itself with and between them. It is many, but also one. Encompassing, yet fragmented. Now, yet then. Here, but also there.

"Indeed, if anything, meta intimates a constant repositioning. It repositions itself with and between neoliberalism and, well, keynesianism, the 'right' and the 'left”, idealism and 'pragmatism,' the discursive and the material, the visible and the sayable. It repositions itself among and in the deconstructed isms and desolate ruins that rest from the postmodern and the modern, and reconstructs them in spite of their un-reconstructableness in order to create another modernity."

And here's the abstract from an interesting article:

"This essay argues that Hans-Georg Gadamer’s philosophical hermeneutics, Jürgen Habermas’s communication theory, and Jacques Derrida’s deconstruction all fit together within one philosophical paradigm: metamodernism. Metamodernism, as defined, is opposed to both modernism and radical forms of postmodernism. Within metamodernism, a political conundrum provides the key clue for understanding the relations among Gadamer, Habermas, and Derrida as well as for elaborating the contours of the paradigm. Specifically, the political implications of the three philosophies are intransitive: they seem to shift around rather than being in fixed relations to each other. So, for instance, Gadamer sometimes seems to the political right of both Habermas and Derrida, but then, at different times, he stands between them, and then again, at other times, he seems to be to the left of both. This political paradox suggests that the traditional (modernist) political categories of liberalism and conservatism do not suitably reflect the critical positions within metamodernism. Gadamer, Habermas, and Derrida are far more concerned with explaining the possibility and techniques of interpretive and social critique, while remaining true to the metamodernist paradigm, rather than fitting themselves into the traditional liberal or conservative political camps."

One can download the entire paper at this link.

Some excerpts from this article in Notes on the "state of the subject":

"Postmodernism announced the death of the subject, but recent developments in literature, philosophy and political agency suggest that it is alive and kicking as ever. Not in form of the modern Cartesian ego though and also not in denial of all the subjectivity-disrupting forces that postmodern theory pointed out..... These achievements remain unchallenged. Nevertheless....a rethinking of subjectivity can be heard.... I would suggest that it reappears in a confined space that Peter Sloterdijk in his Spherology describes as a 'Bubble'– an artificially created space, where in a human, intersubjective experience.... Wasn’t the subject of Postmodernism (as Slavoij Žižek doesn’t cease to remind us), essentially powerless in the workings of global capitalism? Then the symbol of the OccupyWallStreet-Protests, the fragile, yet brave and daring ballerina on top of the iron bull, definitely proves a new kind of political agent." 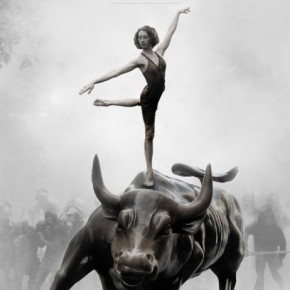 Metamodernism as a Paradigm of Integration

"In 2005, three years after the publication of Eliott’s study, metamodernism appears in the title of an article by Canadian scholar Stephen Feldman: “The Problem of Critique: Triangulating Habermas, Derrida, and Gadam...”.1 Feldman endeavours to show that “Gadamer’s philosophical hermeneutics, Habermas’s communication theory, and Derrida’s deconstruction all fit together within one philosophical paradigm: metamodernism” (296).

In doing so, Feldman captures an important feature of metamodernism: integration. Like Elliott, he starts from reflection on and uneasiness with twentieth-century concepts, most of which have been handed down by tradition, and therefore need to be reconsidered, since “traditional (modernist) political categories of liberalism and conservatism do not suitably reflect” contemporary tendencies:

Gadamer, Habermas, and Derrida are far more concerned with explaining the possibility and techniques of interpretive and social critique, while remaining true to the metamodernist paradigm, rather than fitting themselves into the traditional liberal or conservative political camps. (Feldman 296)

Feldman describes metamodernism as a paradigm of thought, “a world-view, a set of presupposed beliefs that pervasively shapes one’s perceptions of and orientation toward the world” (297), by which he outlines the genus proximus rather than the specific difference of metamodernism.

The disagreements between the three philosophers – Gadamer, Habermas, and Derrida – arise from their having “different aims” and asking “different questions” (297), but these do not make their systems incommensurable,2nor do they preclude their sharing “certain fundamental presuppositions about our being-in-the-world” (297). Such dissimilarities “are those that might arise within a shared paradigm” (297).

While a re-evaluation of liberalism and conservatism is timely, one may feel uneasy with his attempt to prove that the three philosophers mentioned are “concerned with remaining true to the metamodernist paradigm” (296). Here Feldman tries to suggest a third term, neither liberal nor conservative, which is quite a remarkable proposition, but the question which arises is whether it is possible for anyone to remain true to something if they are not even aware that it exists. This stylistic – or, rather, cognitive – lapse aside, Feldman’s article is a good attempt at showing that “Hans-Georg Gadamer’s philosophical hermeneutics, Jürgen Habermas’s communication theory, and Jacques Derrida’s deconstruction all fit together within one philosophical paradigm: metamodernism” (276).

Feldman’s essay is significant in that it makes two claims regarding metamodernism: an explicit and an implicit one.

Therefore, although the term has sporadically been used in the previous century, and texts describing features of metamodernism have been published before, the twenty-first century carries the promise and actualization of metamodernism.

As the twentieth century was the century of modernism and postmodernism, the twenty-first has a good chance of being metamodern.

© Copyright note. The text above is an excerpt from Alexandra Dumitrescu, Towards a Metamodern Literature, PhD thesis manuscript

John: I am less interested in the classifications as I am in who is doing the classifying? And where is the evidence? Or is this just someone's wish list for the good life? Seems the standards are so vague as to fit just about anyone I know. Only the lonely it would seem to me or those who have a lot of time on her hands would be that interested in joining this meta club. I have seen this self infatuation thing many times before. I guess I am triggered by going meta. The meta trap-

Me: I also noted on their website that they're a big fan of the model of hierarchical complexity, as if that determines what is meta. As I noted in this thread, the MHC is still just more complex but deficient formal rationality. Sure hierarchical complexity as in the likes of the OOOers like DeLanda, Bryant, Cilliars, Morin etc. But that sort of complexity is entirely absent from these meta-stasizers.
Hmm, yes, metastasize is a good metaphor here for deficient (meta)rationality.

I've recently discovered Seth Abramson at Huff Post, as he's writing articles on the Presidential election. Going to his website I discover that metamodernism is also one of his interests. E.g., on the essays link see "the 10 basic principals of metamodernism." I'll just provide the bullet points below; see the article for details:

1. Metamodernism as a negotiation between modernism and postmodernism.
2. Dialogue over dialectics.
3. Paradox.
4. Juxtaposition.
5. The collapse of distances.
6. Multiple subjectivities.
7. Collaboration.
8. Simultaneity and generative ambiguity.
9. An optimistic response to tragedy by returning, albeit cautiously, to metanarratives.
10. Interdisciplinarity.

More interesting are the political commentaries themselves. I've just read the latest four:

John Kasich Will Be the Republican Nominee for President

The Democrates Are Headed for a Contested Convention Too

The essay on the 10 Principles of Metamodernism is an interesting read as well.  I was reminded of Edgar Morin's work, especially related to points 2 (Morin's "dialogics") and 10 (Morin's "transdisciplinarity"). This is my first intro to metamodernism, and I'm glad it's happening.  But I wonder, as you seem to suggest in a note above: perhaps there's not as much depth here as there is in the already developed work of complexity thinkers such as Morin, Cilliers, etc.?

But maybe that's OK, if it allows for a wider cultural uptake.

I've recently discovered Seth Abramson at Huff Post, as he's writing articles on the Presidential election. Going to his website I discover that metamodernism is also one of his interests. E.g., on the essays link see "the 10 basic principals of metamodernism." I'll just provide the bullet points below; see the article for details:

1. Metamodernism as a negotiation between modernism and postmodernism.
2. Dialogue over dialectics.
3. Paradox.
4. Juxtaposition.
5. The collapse of distances.
6. Multiple subjectivities.
7. Collaboration.
8. Simultaneity and generative ambiguity.
9. An optimistic response to tragedy by returning, albeit cautiously, to metanarratives.
10. Interdisciplinarity.

In the 2/21/15 comment I was referring to the metamodernists that use the model of hierarchical complexity as meta-stasizers, not the more recent posts on Abramson. I've just begun to investigate the latter so not sure about his depth yet.

From Abramson's "On transcendent metamodernism," touching on several of this forum's themes.

"But a still more intriguing question is whether antipodal analyses are any longer useful, or whether the time has come to speak of multiple dimensions of reality, actualities that are irresolvably contradictory and deliberately incalculable, and a state of affective response in which contemporary humans feel perpetually overwhelmed, but not critically degeneratively so. Whereas postmodern theories of hyperreality invariably metaphorized erasure of the line between fact and fiction as a gradual process of degeneration, collapse, and decomposition, metamodernism approaches contradiction, paradox, and ambiguity as reconstructive forces, and emphasizes not singularity qua collapse but multiplicity qua transcendence" (7).

I like the quote.  Again, it reminds me of Morin, which is a good thing.

The other day I found a nice 9 page piece (2012) by Morin that nicely sums up his thinking: "Complex Thinking for a Complex World." From a presentation at the occasion of an award of the Bertalanffy Prize in Complex Thinking.

On YouTube here, but I haven't watched this video presentation yet:

I really like that Abramson makes generous use of contemporary culture in his examples, from Wes Anderson movies (particular favorite of mine) to various YouTube videos, etc., connecting his ideas to concrete examples that we can all relate to.

Yes, that's part of his notion of metamodernism, that it expresses in our daily lives. The philosophical notion of it is just the intellectual description, for without the concrete daily lived experience philosophy is effete and self-serving.