I decided to give this its own thread, as it's a movie that addresses many recent forum themes, particularly the internet of things (IoT). I'll move over the comments from another thread for now. Note there are spoilers therein if you've yet to see it.

The movie Transcendence opens today, which I'll see this afternoon. I still think its premise is remiss given the critique of Wolfe, Hayles and others. I think it was Lakoff that criticized that idea because it's founded on the disembodied, abstract notion of mind, that such a consciousness doesn't have a 'body' with feedback loops etc. However the emerging IoT has embodied sensors and feedback mechanisms, which is sort of its version of space-time image schema. So while downloading human consciousness into the net still seems fantasy, maybe the IoT could develop its own consciousness given this complex, interconnected embodiment?

I enjoyed the movie, despite many critics that do not. (Roeper is an exception, giving it a A.) It had many of the themes we've been discussing of late, primarily the benefits and dangers of the IoT. After Depp's character is uploaded he develops nanotech that heals people, makes medical discoveries, creates better ways to farm for less cost with minimal pollution etc. However in the process of healing folks with nanites they become 'hybrids' with super strength and are connected to the 'grid.' They still maintain their autonomy but are linked in the 'commons.'

This of course frightens everyone else, including Depp's past associates, who thinks we'll somehow transcend our humanity and become machines if this continues. They even convince his wife, who heretofore went along with the program. She accepts intentional infection with a virus so that we she too is uploaded it will kill the program. Depp of course knows the plan but accepts it because he loves her and believes her when she tells them he is 'hurting' humanity.

Thing is, nothing he has done has hurt anyone, only helped them. The only hurt is from the self-generated fear of becoming something more than typical humanity, becoming hybrid, becoming Borg. It appears Depp realizes that humanity is not yet ready for the next step in its evolution and let's his wife infect him and shut down the program.

And yet at the end it appears Depp and his wife still exist in the nanotech implanted in their home garden, if their own LAN if not in the entire internet. Will this open a sequel?

In the beginning of the movie Will (Depp) and Evelyn (Hall) cover their garden with copper wiring to insulate it from all electronic invasion. It is to be a respite from their obsession with electronic artificial intelligence, a place where they replug into nature to rejuvenate and relax. And yet at the end they continue to exist in this insulated nature/nano hybrid environment. But is it still insulated from the electronic grid? Does the copper tubing still keep it in and the net out, given its now hybrid nature? Can it not continue to propagate and communicate in the water, soil and air?

Granted to destroy the program they had to shut down the entire net, and the entire energy grid along with it. So the beginning and end of the movie are in this post-electric world. But something tells me the new hybrid creature left at the end will perhaps create a new sort of bio-electric communication grid. It is perhaps biding its time in the little garden until humanity is ready for the coming transcendence?

According to the wiki the nano-tech is what is alive and well in the rain, air and soil. Apparently all of it, not just this little mecca. So I wonder if Will and Evelyn are still a part of this artificial/natural (artinatural) matrix? Or it it continues to exist without any individual consciousness(es)? Of course these same questions can be asked of Nature itself. Which of course brings up our OOO discussions where Morton proclaims that there is an "ecology without Nature." And the whole notion that it is an anthropomorphic projection that some kind of organizing self or agent is necessary in nature or in man. Again bringing us back to Wolfe et al.: "[it] is not abandoning the autonomous liberal subject but is expanding its prerogatives into the realm of the posthuman."

And since we humans 'after the fall' are continuing to consume the air, water and animal/plants we are all 'infected' with the nanotech. We are all part of the Commons now, despite the effort to shut it down. It would be interesting to see this theme developed if there is a sequel, as in what little of the post-fall era the film depicted didn't seem to expand much on what it was like. Other than an apparent return to Nature. But Nature is now artinatural! God help us... Oh wait, It is God!

I haven't seen this film yet (though I'm planning to), but I did see this video today, which offers a relevant "note" to sound here.  The musical portion of the video (Imogen Heap singing about being a machine, using computerized gloves that allow her to pull music out of the air) begins around 13:25.

This review says something I've been saying:

"It's not one or two brilliant, irresponsible people actively doing things that eradicate privacy and alter reality: it's a sort of passive acceptance that eventually becomes adaptation, or evolution. Other people don't re-wire our brains, it just happens as we live more of our lives online. The problem isn't that some disturbed individuals want to turn us into machines against our will (ahem), it's that we don't have enough will to resist becoming more machinelike. We're slaves to convenience. Yes, you too. Just look at you right now, reading this on your computer, or your handheld phone, maybe in bed."

Imogen Heap is a fine example of what I've been talking about, this artinatural hybrid. Or splice, if one prefers that word. It is art, and interestingly, art is the base of words like artifice and artificial.

As a curiosity, the cyber terrorists against the AI project are called RIFT, for Revolutionary Independence From Technology. Whereas I see the Rift as that folded hybrid at any boundary, like here and following. Ironically, RIFT tries to prevent the Rift but in so doing only helps to create it. But now the Rift is below its radar, so to speak.

From the U of Cambridge nanotechnology art gallery.

The colours in the image show the different directions of the magnetic field in a layer of polycrystalline cobalt that has a thickness of only 20nm. The direction of the magnetic field in the film changes at the positions of domain walls. The field of view is approximately 200µm. The image was acquired using the Fresnel mode of Lorentz microscopy in a field emission gun transmission electron microscope. It was recorded out of focus to enhance the contrast of the domain walls, and then converted to a colour induction map by applying the Transport of Intensity Equation to the image intensity. 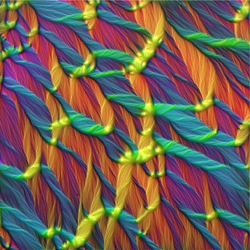 Stephen Hawking and cohorts warn about our complacency of transcendence.

I just got back from seeing the film with some friends and we all enjoyed it immensely. Even the women, which even surprised me. It did keep me engaged and i thought that it flowed well and had good editing.

I've 'seen' the intelligence at the nano level which is why i lean toward panpsychism and the primacy of consciousness.

It's interesting that the writers divorced the soteriological impulse of technology from its master in real life: The Corporation. So, who does J.D. character represent? Hmmm, who created those hybrids in human mythology?

In these there neck of the woods them dang pesky angels are thought no different than santa's and pixies! lol God , i'm a pain in the ass!