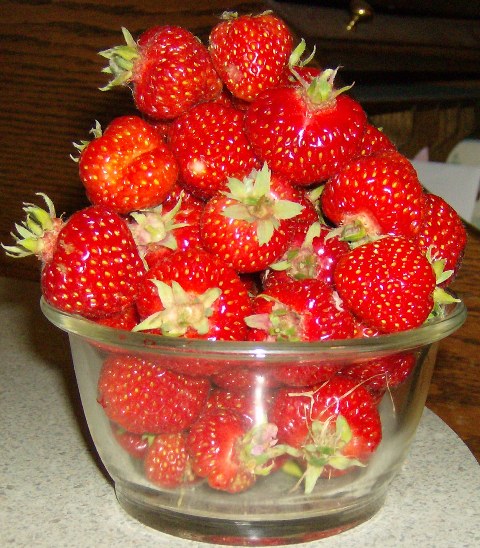 We don't usually get strawberries in the pacific northwest until June!

And DM, you're so right about the difference between in-season cared-for local fruit and mass-grown shipped to great distance.

I can hardly believe the difference between tomatoes eaten right off the home vine and those from a typical store - different critters.

My dad worked for one of the first cable tv companies. Their giant satellite dish was located at the edge of town in the woods, as we called them. During harvest season my whole family would go out there to pick the huckleberries, from which my mom would make the best pies. Ah, berry memories...

In the 40's and 50's in New England in the fall, the apple man would drive the neighborhood streets - MacIntosh apples. I remember him driving up the driveway and offering a sample. He would grip an apple in both hands and twist, yielding two halves - impressive. To a young mouth, those were good tasting.

t, you may also have had milk and bread delivered to your door, as we did, on a regular basis. Maybe an inch of cream floating at the top of the glass bottle.

Ok, a nostalgic flood - remember when oleomargarine first came out? Well, we'd get the product and the yellow die, I believe, in a soft plastic bag, and we would kneed the bag until the color was evenly dispersed. Funny, eh.

In high school, for parts of a summer or two, I also picked strawberries. we could take a bus that the farmer sent around, and my neighbor and I did that, but we also rode our bikes a few times at least. I can't quite believe my eyes when I look at a map now from Lake Oswego, Oregon to Aurora, Oregon - it's so far. Could it really have been Aurora, as I remember? Hah. Those were 1959 or older bicycles. And back home, at the end of the day. We would start pedaling in the early dawn.

Ate so many strawberries, I may still have some aversion :)

But we didn't really hike 10 miles through deep snow to a one-room school house, did we?

Oh, I should add that the difference in taste between our fresh, local, in season berries and the out of season California strawberries is like the difference between night and day.

When I was a kid (the 60s), our summer vacation from school became a summer job in the local berry fields of Whatcom County.  School teachers were recruited as supervisors, and would drive old retired school buses around the city to pick us up and transport us to the fields in the county.  The strawberries rarely ripened before school vacation began in June.

This reminds me of when I was a kid. Way back then (the 50s) farmers would load up their trucks and drive up and down our small town streets ringing a bell and proclaiming loudly: "Strawberries, blueberries, cherries." We'd rush out to the truck to get fresh fruit that cost less than the supermarket and came right from the picking.

Yes, I'm comfortable with some light oil sprays, and I try to do that for my small peach tree when I remember...but for my larger apple trees, it does not seem to be time or cost effective.

And yes, it's a challenge to keep up with all the pruning and maintenance. I enjoy it, but I also enjoy being inside and reading, studying, and thinking about philosophy and spirituality, not to mention being active in my community, holding down a job, etc.

David, do you ever feel comfortable spraying a light oil or some other determined benign coating that helps the plant amidst insects? Or is there such a thing?

Cool, on the fruit trees. Back when I had a home, a family and a life, I planted many fruit and nut trees at our place in SoCal. Keeping up with it all often seemed a bit much for me. Unless one mostly truly loves the tasks and the putterings, eh.

Thanks Ambo. Yes, from our garden.  Seeing lots of pears and a few apples on trees that never bear fruit.  Lots of kiwis and peaches coming too! However, it also looks like a year with more worms and pests (since we don't spray). Seeing a lot of caterpillars in the apple trees.  Global warming has mixed blessings!

Great 'red' in the photo.