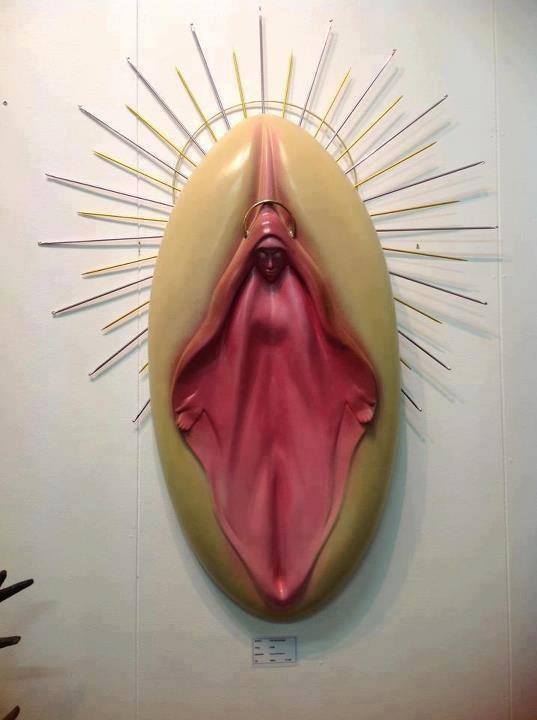 "Cuneiform", the most ancient form of writing, derives from "kunta" meaning "female genitalia" in Sumerian of ancient Iraq. "Kunta" is "woman" in several Near Eastern and African languages and a Mother Tongue that is being compiled by linguists today. It was also spelled "quna," which is the root of "queen." Since priestesses were known to be accountants/administrators of Temple of Inanna in Sumeria c.3100 B.C. when Cuneiform was first used, it is highly likely that cuneiform was "the sign of the kunta" who kept the books (clay tablets) for the temple economy/redistribution of wealth that evolved from communal economics of ancient mother-cultures.

So when an abuser calls a woman a "cunt" he is actually calling her a "queen who invented writing and numerals." Girls and women can thus reclaim the words in our language that have been used as weapons against us in emotionally explosive situations. The word "prostitute" (law giver of the temple) and "whore" (houri, Persian, which means a gorgeous semi-divine female that awaits men in the 7th Heaven) are some of the finest compliments a woman can be given.

Many ancient languages did not have huge vocabularies as we do and the same word had many meanings, according to the context in which it was used. "Kunta" is also the root of kundalini (energy), khan (highest leader of the Eurasian steppe nomads, whose society was originally matriarchal and who still have remnants of a matriarchate), quantity, any words that start with "kw", qu, or kh. Examples: Cunda, mother of Buddha according to Japanese; Cunti-Devi, Goddess of kundalini energy, India; Kunta, means literally one who has female genitalia, and describes a priestess, ancient Sumeria; Kun, Goddess of Mercy, India; Quani, Korean goddess; Qudshu, female priestess of ancient Canaan & Phoenicia, which became the Roman province of Palestine after they conquered it; Quadesha, Sumerian word for a type of priestess. Qu' can also mean love, sensuality, sexuality, the divinity present in all females.

So, the most interesting conclusion is that the Quran, is actually the book of love for females. Female sensuality is probably the literal translation, but Muslims translate it as "reading or lection", which is also flattering to females because the mothers of Arabs were always their only teachers before Mohammad dictated the Koran. Now they have Koranic schools called "Madrasas", the mother-schools, although they now teach only boys and denigrate women. Almost every value word in the Muslim religion, including "Muslim" is a mother-word, derived from the mother root: Mohammad, mufti, mosque, madrasa, Makka (Mecca), Madina, mukhtar, mujahadeem, mezes, and many, many more.

Another variation is "quern," a hand-mill used by ancient women to grind grain into flour. The etymology points to housewives of ancient Mesopotamia, present-day Iraq and parts of Iran, Palestine, & Syria, where agriculture began, as the ones who invented bread out of flour by adding a liquid and letting the dough sit for while until air-borne yeasts raised it. When baked in their clay ovens, it resulted in the most remarkable invention of the human race, the staff of life, bread. It was also baked quickly, without waiting for the yeasts to lighten it, and is known today as pita.