It may be hard to believe, but police in the U.S. are routinely taking people's money without charging them with a crime using a legal tool called civil asset forfeiture. They're not just taking it from drug dealers or suspected drug dealers as they have in the past, but also from people who just have large amounts of money in their car.

The money is used to fund agency budgets, and they are able to take it without even charging people with a crime. You are guilty until proven innocent with regard to the money. Since most people can't afford the legal fees to get it back, they either let the police have it or settle for a lesser amount than what was taken.

Thanks for sharing this, David.  Definitely concerning news -- and a practice that needs to be challenged.

Any regular viewer of "comedy news" has probably heard about this a dozen or so times over the past few years.  Is it hard to believe?  Well, as a Canadian, it is not hard to believe.  It sounds, if one will pardon the expression, like exactly the same shit the rest of the world is always hearing from the so-called United States.  People here are always looking anxiously at our government and worrying about the possibility of "becoming like the Americans".

The USA is a country balanced partway between the leadership of the civilized world and a regressive 19th century dystopia.  It should horrify us.  It should not surprise us.  And citizens in other (apparently more progressive) countries ought not to rest on their laurels.  The age old struggle between "corrupt, stress-based, oligarchic/corporate proto-democracy" and "cultural flourishing" has been exacerbated by the re-medievalising effects of digital technology.  We are all poised between progress and pathology.

Bruce, yes, it is disturbing, and I think it's important to challenge. A lot of these stories arise and get buried.

Layman, police using civil asset forfeiture laws in the U.S. is indeed not new. They have used it to take houses away from people with a few marijuana plants in the basement for decades, for example. What is new is the scale and the way it has been expanded beyond drug dealers and terrorists. I have been lectured by people who understand the U.S. through comedy news before, though, so your response is not surprising to me.

I also think generally that you might consider the complexities and difficulties large and diverse countries like the U.S. have to deal with. It is not particularly linguistically diverse, but according to other measures it is very diverse, as well as large, and that brings with it a host of issues, difficulties, and responsibilities that other countries don't have to deal with.

It's much easier for small, less diverse countries to come to political agreements and create things like national health care systems, especially when they don't have to worry about their security. The U.S. spends much more on their military than any other country in the world -- a fact it is often criticized for -- but then it does protect many other countries, who can spend their time and money on internal affairs and who always come calling when there is a threat in their neighborhood.

Americans have long paid a price for protecting NATO countries and other countries around the world with a lack of attention and funds for their internal affairs. If other countries were to fulfill their NATO obligations, the U.S. would have more money and time to spend on issues like this one and domestic agencies would have less financial pressure. 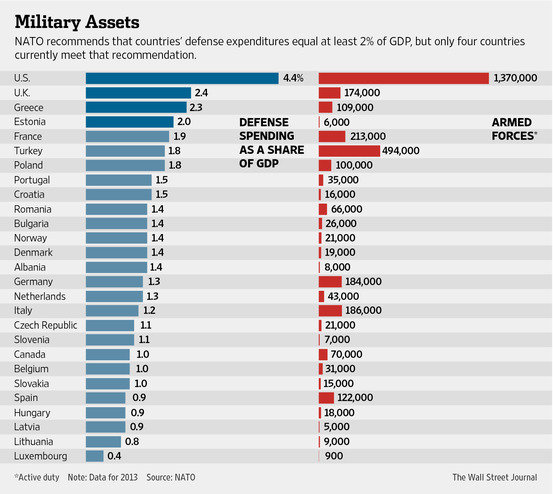 Sure.  If we want to take a look at which structural factors make the progressive coherence of the United States difficult we will find several prominent and understandable features.  We may wish to say they are unique relative to these features or else we may wish to say that each of the Modern Nation-States has its own unique set of challenges and opportunities in their attempt to embrace their past and navigate their future.  Either way we find that these sort of "obvious" problems are exacerbated by something fairly recent.

This dramatic increase and proliferation you mention is part of what I had in mind when I pointed to the well-known predictions about how digital technology is likely to amplify certain trends.  All sorts of things (including corruptions) which had a relatively stable place in the previous socio-political order are set free into vaguely "feudal" scenarios which seemingly cannot quite be addressed by the previous system.  A whole new framework governance and social organization is needed to handle these problems, a new "contract" -- but whether that can be arrived at through growth and permutations of the existing legal infrastructure or whether it requires radical changes is heavily debated.

I am a strong military interventionist.  Obviously everyone (sic) knows full well that the Americans overspend on military for what they get -- just as they outspend on medical systems without getting the best results.  However they should have a dominant global military.  Just a smarter and more cost effective one.  And certainly one that is less prone to cooperate in the unthinking militarization of the homeland.

If local law-enforcement wants to behave like the US military they "ought" to have to met the same, ever-intensifying, training requirements.

In this and so many areas the conservative are right to say that the problem is not the proliferation of weapons and aggressive interventions.  Ultimately this is not a problem.  The problem is the lack of interior development, the lack of training, the untrustworthiness or the people using the weapons and implementing the police interventions.  However until we switch massively to a system which profiles the insides of people rather than their external circumstances we can expect that unreliable people will routinely be empowered and allowed to misbehave.

They've finally done something about this.

"Holder’s action represents the most sweeping check on police power to confiscate personal property since the seizures began three decades ago as part of the war on drugs.

"Since 2008, thousands of local and state police agencies have made more than 55,000 seizures of cash and property worth $3 billion under a civil asset forfeiture program at the Justice Department called Equitable Sharing.

"The program has enabled local and state police to make seizures and then have them “adopted” by federal agencies, which share in the proceeds. It allowed police departments and drug task forces to keep up to 80 percent of the proceeds of adopted seizures, with the rest going to federal agencies.

“ 'With this new policy, effective immediately, the Justice Department is taking an important step to prohibit federal agency adoptions of state and local seizures, except for public safety reasons,' Holder said in a statement."