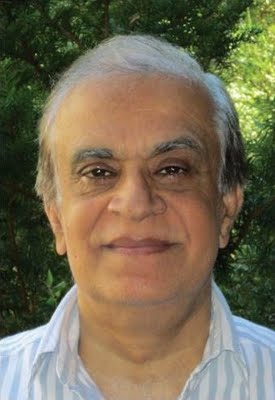 Rajiv Malhotra, author of Being Different and Indra's Net, and a critic of Western academia for colonialist raiding of Indian sources (without attribution), has issued a challenge of sorts to Wilber or other integralists.  He says that the recent developments of Integral Christianity and Integral Judaism are little more than the Hindu-ization of these Western traditions, and that the reason Wilber or other integralists have not proposed an Integral Hinduism is that this would expose Integral as completely unoriginal, with nothing to offer to Hinduism that isn't already present in it.

What do you think of this?  Is he on the mark, or is he misunderstanding what an "integral" approach is about?  What would an "Integral Hinduism" look like?

(My sense, which I can discuss later, is that he is mistaking some of the content of Wilber's books as the essence of integral, rather than its meta-theoretic capacities for contextualization and integration...)

Oh, good! As a half-decently informed layperson, I look forward to that symposium. Hopefully, it doesn't look like this: canned responses from a seeming global 4th reich ministry of spiritual propaganda; one that anticipates all the many grievances and has pre-planned, preconceived solutions. Now, in no way am I saying that that is what Integral is; but there are those who are viewing it like that, and people like Joe Corbett have been pointing out the problems with Integral being too cozy with the neoliberal elite establishment.

Here is a tom dispatch link that points out the extant of the neoliberal war machine:

This looks to me to be a method of making sure the financial interests of 1% of the earth's population is taken care of. And yes, IMO, these issues are related.

I'm going to do my best to keep this 4th Reich panel marching in goosestep correctness, I promise.  That's just the way I roll.

To be clear, that is not what i believe about Integral, all I said was that is one perception of Integral Inc. on the world stage ( think of it as my reporting on that perception).

This from todays tom dispatch:

Similarly, none of the retreads Hillary, Jeb, or Mitt would bring with them will have a new idea or entertain a thought that wanders off the Washington reservation.  And that essentially guarantees one thing: Republican or Democrat, it’ll be dead air to 2020 -- and if either a Bush or a Clinton is then reelected, until 2025, by which time the U.S. would have been led by those two families for 28 of the last 36 years.  Washington is, in this sense, the land of the walking policy dead and war, safety, security, and intelligence (that is, failure and disaster) are ours to the horizon.

This is a fact, and Wilber's endorsement of these names as Integral(in some sense) is also a fact, at least as far as I can tell.

Anyway, pondering the Hindu caste system and how that may be playing out in different ways in todays world:) Oh, i can't wait for that post!

Some comments on Gier's paper that I think is mostly a well thought out accurate assessment. On the first section: there is no one monolithic Hinduism any more than there is one version of Christianity; what we have is a multiplicity of metaphysical assertions spanning the globe over millennia. It seems to me that our task is to try and sort out which ideas have the most resonance and coherency; while at the same time factoring in our cultural conditioning, and being aware of how bias enters into our assessments. IMO,  i think one would reasonably conclude that there is some type of insanity/interference/ incongruence  happening here if we were to assess every metaphysical belief that humans have held over the millennia. I get that SDI tries to address this issue.

Philosophically speaking, I think the quantum vacuum and Bohm's implicate order may be some kind of interface to subtler realities; but it isn't god or spirit in and of itself. How that ocean of possible information interacts with the human brain and consciousness is a very good question indeed. Which leads to  his last section where I agree with his constructive process theology. The difference I have with him there is he seems to conclude that there is not a super intelligence beyond that assessment /framing. I get that it looks that way but I still think it better to remain 'agnostic' on that issue. I am 'agnostic' there in the sense that I think there is.

A note on the fascist thing: Wilber just happens to be situated in a time and place where his home country is acting out in the way empires always do. That is not his fault although history shows that politics co-opts spirituality for its own ends.