Here's a new Integral World article on evolutionary democracy for all you meme creamers, sure to elicit a wet spot in your panties. It's written by Elza Maalouf, an associate of Don Beck who practices his SDi. Before we get those panties in a bunch again, this is relevant to 'spirituality' in that I agree with Wilber from excerpt A that the techno-economic base is a leading factor in determining the overall general superstructure view of society at large, including how that view expresses in religious or spiritual generative (en)closures. We might explore how this manifests in our integral postmetaphysical spiritualiy, like how ontological pluralism is an example of the "distributed intelligence model" below.

The article gives a rundown of appropriate political forms for different countries. Of note is that the US needs to expand into social democracy (green), while Germany and northern European countries are entering functional democracy (yellow). A characteristic of the latter is a "distributed intelligence model." Interestingly, Rifkin is working with Germany on his third industrial revolution plan, aka the Commons, which no doubt is a big factor in this move into yellow. Holonic democracy (teal) is a couple of centuries off, so not likely to be at all like the exit orange conscious capitalism of the current kennilingus meme. We might discuss how conscious capitalism affects kennilingus notions of spirituality, as I've done ad nauseum in this forum.

Edward, yes. And I really do think the article is interesting and important - if this were not an integral forum, I might be inclined to underscore some of the ideas that would be foreign to a mainstream audience.

A couple of short lines that I think would be beneficial to further develop:

1) She writes about Holonic Democracy: "But sadly, based on the human journey since, the purpose of this system will not be a result of the natural unfoldment of conscious [sic], but to ensure the survival of the human species."

This is a signal to me that, based on her years of practical experience trying to put these ideas into action in the real world [got to give her LOTS of credit for that], she understands that evolution is not a simple straight line "arrow of progress," but that big shifts usually first require a big crisis - a period of chaos - before we respond appropriately to avoid extermination.

2) She writes that the transition in the Middle East to a nation-state stage of development will be complicated by at least three factors, one of which is "The sudden appearance of oil which propagated the fallacy of wealth in the hands of the few as the ultimate symbol of modernity, which led to a culture-wide sense of entitlement and complacency."

I'm encouraged that she acknowledges the role of oil in the Middle East, and am curious how she covers this issue in her book. I suspect that she is not factoring in the decline of this resource, which I feel has already been an important factor in what led to the Arab Spring and numerous other ongoing events.

In this regard, Michael Klare's many articles on TomDispatch.com, and his books (The Race for What's Left, Rising Powers, Shrinking Planet, Resource Wars, and Blood and Oil) offer an important additional perspective that must be included for a well rounded discussion of political development, especially in the Middle East.

Iraq, Syria, Nigeria, South Sudan, Ukraine, the East and South China Seas: wherever you look, the world is aflame with new or intensifying conflicts.  At first glance, these upheavals appear to be independent events, driven by their own unique and idiosyncratic circumstances.  But look more closely and they share several key characteristics -- notably, a witch’s brew of ethnic, religious, and national antagonisms that have been stirred to the boiling point by a fixation on energy.

...It would be easy to attribute all this to age-old hatreds, as suggested by many analysts; but while such hostilities do help drive these conflicts, they are fueled by a most modern impulse as well: the desire to control valuable oil and natural gas assets.  Make no mistake about it, these are twenty-first-century energy wars.

The primacy of the role of energy in cultural evolution was articulated extremely well by Leslie A. White. I am currently reading his 1959 book, The Evolution of Culture: The Development of Civilization to the Fall of Rome. I'm only half way through chapter 2, but I'm thinking that any serious study of evolutionary cultural development should consider White's views on the role of energy in culture.

To understand man in particular we must understand living material systems in general. As we have just seen, the second law of thermodynamics contributes greatly to the understanding of the process that we call life: it illuminates its structure, its functions, and its development. And this law will help  us to understand culture also; the fundamental  significance of culture cannot be grasped or appreciated without recourse to this great generalization of physics.

Edward, to bring it back to spirituality, "what sorts of spirituality [do you believe] are in alignment with that process" of the "worldview consciousness and enactments that are required to bring about planetary healing"?

For me, I seem to be moving toward a naturalistically oriented process mysticism, following the lines of James, Dewey, Whitehead, Wieman, Meland, and Loomer (having just read Frankenberry's marvelous book Religion and Radical Empiricism), with practical application input from Shinzen Young (The Science of Enlightenment), and Thomas Hubl, and PatternDynamics.

As to Edwards' criticism that the developmental lens is not in balance with other lenses, and that all lenses must be viewed in an ecological and interdependent frame, I'm reminded of this post on how Edwards' different lenses could very well be the outgrowth of the different forms of image schema. As the part-whole  schema is only one of several, a fixation on it could support Edwards' claims. Also see this post and several following for how image schema themselves change the sort of whole-part relationship of classical set theoretical notions of hierarchy.

From the FB discussion:

LP: If we define guru/disciple according to its "archaic" style -- then it can only be affirmed by people operating an archaic social operating system. If we stratify it into something that has different styles at each developmental layer then the model is freed from the problematic nature of primitive nature. If we bring that model forward to postmodern & integral levels we find that a more playful, more fluid, more sensitized dynamic must accompany the production of a meta-sangha. There is nothing in the notion of vertical differences of "beingness" which requires it to an affair in which limiting notions and clumsy interpersonal politics predominate. Although we should be looking here (as Lakoff and Reich have done relative to the formation of moral-ideological conscious) in the patterns established within the early life domestic environment. Problematic pseudo-vertical relations will flourish in any system where its citizens primary experience comes in unhealthy, suppressive, non-challenging or integrity-breaching home environments.

Me: I'm inclined to use Wilber's notion of sub-personalities here, where aspects of oneself in certain contexts and/or lines can get stuck in a lower order. Just because aspects of the Lingam could be considered higher order doesn't mean he isn't stuck in this sort of archaic guru fixation. The Wyatt Earp episode was one of the more blatant demonstrations, but there have been several others. His fixation with conscious capitalism could be considered another.

For clarification, my last reply above was written before I saw your last 4 replies, Edward.

I agree with Mark Edwards': "...The use of the developmental lens has to be much more sophisticated that that. We need to combine it with and differentiate it from many other lenses if we are to see how stage-based development aligns with other aspects of transformation."

As well with Bauwens, and we could add Bonnitta Roy's Onto-Logics here as well I think.

Due to an early life head injury resulting from the back hoof of a agitated farm mule, I am constantly on the look out for thematic commonalities which provide political and intellectual communion between all persons who have glimpsed or inhabited post-relativistic, post-post-modern & meta-theoretic worlds.  So my infirmity leads me to observe that everyone in this discussion affirms both the need to establish effective and progressive mutuality between sophisticated developmental models and all other significant lenses.  We are all, also, it seems to me, agreed on the necessity to foreground energetic, technological and material dynamics both in human history and in the implementation of benevolent evolutionary possibilities for the near future on this planet.  Everyone who senses such things enters into the new "big tent".

But I have a word about:

> For me, I seem to be moving toward a naturalistically oriented process mysticism, following the lines of James, Dewey, Whitehead, Wieman, Meland, and Loomer (having just read Frankenberry's marvelous book Religion and Radical Empiricism), with practical application input from Shinzen Young (The Science of Enlightenment), and Thomas Hubl, and PatternDynamics.

I will relate it to my detailed sketches of the difference between religious, spirituality & mysticism as well as the distinct forms of appropriate religiosity at each of the major developmental layers.  These are only tweaks to what David says above -- which clearly identifies itself as multi-domain, integrative-level spirituality.  The tweak I am moved to add is that "naturalistically-oriented process mysticism" is a process of gaining access to particular perspectival domains and experiences.  Mysticism is primarily about such access.  Yet spirituality is primarily concerned with the subsequent integration, assimilation and interblending of the results of various types of mysticism.

Hey LP, i had a similar misfortune as it was rumoured that my dad accidentally dropped me on my head in my first year! Obviously, i never recovered fully:( i wanted to define eco-fascism within the context in which  I used it: the excessive, degrading, wilfully destructive behaviour by collective agents/actors of eco-systems, usually with a strong profit motive. I was also alluding to a situation wherein a corporation --say a wind farm company-- actually has a hidden corrupt agenda. Eco-fascism in this context would not be defined as first nation people ( or anyone) peacefully blockading corporate infrastructure projects. I also think that anyone who posits the death of billions as the solution to ecological problems would be considered an eco-facist, by my definitions.

Loved the poetry on the bubbles thread. i hope what's false and divisive about some of those bubbles doesn't lead to this : 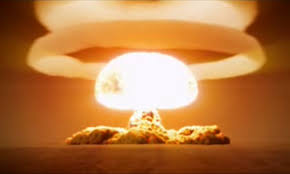 A toast to the unrecovered!  And hopefully everyone here joins you in your impression of what eco-fascism ought to mean.  Here's the Christmas Wiki definition of fascism.

That explains a lot about you two! But if the result is "constantly on the look out for thematic commonalities which provide political and intellectual communion between all persons who have glimpsed or inhabited post-relativistic, post-post-modern & meta-theoretic worlds," then perhaps we could all use a swift kick to the head!